Coast to Coast by penny farthing! 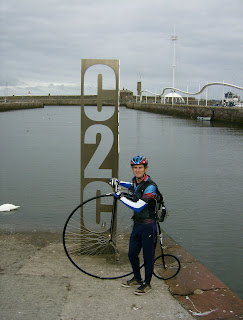 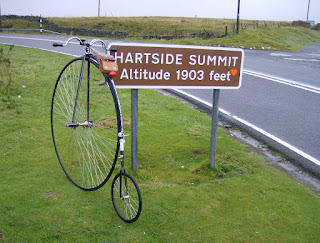 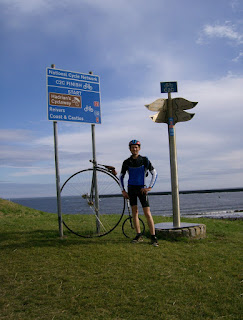 What a journey! I managed to cross the country by penny farthing in three days. I'm sure people have done it faster but I really don't care, for me my goal was only ever to finish the journey so I am more than happy with my achievement.

Thursday 27 Sept 07
I had a really poor nights sleep as I had caught a cold earlier in the week, I was hoping that when the morning arrived I would be ok but I actually felt worse. I'd looked forward to this ride for some time so there was no chance that I was going to stay at home so I just loaded the van and hoped that by friday morning I would be ok.


I stopped for a break at Knutsford and unloaded the penny farthing. Knutsford is the home of the penny farthing museum and anyone who turns up on one gets free tea, so I was off to claim mine! I bumped into an elderly couple on my way and they came with me to the museum. Unfortunatly the penny farthings had all be taken away for cleaning so mine was the only one! There was still lots to see though as the place is full of old photos, signs and penny farthing bits and bobs.

I claimed my free drink and sat talking bikes to the elderly couple and the owners. I learnt that in 2010 there is to be a three hour great race for penny farthings and I was welcome to take part. When they learned about my coast to coast ride everyone wished me well and the old guy told me about how he used to ride over Hartside pass twice a day for months on end when he was courting his wife. Nowadays kids turn 17 and demand a car to get around, when their girlfriends live just round the corner. How times change.

After an hour or so I continued my journey and was soon in Penrith. The owner of the B&B couldn't belive I was going to use the penny for the ride, he'd never seen anything like it. I asked if he had somewhere secure to leave the bike over night and he showed me to his back yard. It was secure all right, protected by the biggest dog you have ever seen!

With the bike locked up I went out for a quick meal then had an early night as I was still feeling a bit rough with my cold.

In the morning I did feel quite a bit better so as we loaded the bikes onto the transfer van I was getting pretty excited about the ride. The other bikes going to the start were all mountain bikes so everyone thought I was mad doing it on the penny. I however, thought they were mad for not bringing a road bike.

After a few photos at the start I made my way onto the official route and I was soon experiencing all of the worst things about cycle paths. The drill for the first 10 miles or so went something like this. Ride for 200metres, get off and push around metal gate, get back on for 200metres then get off to ride down a kerb. Get back on for 200metres, get off to cross road junction. Get back on, get off, get on etc. I love cycling but I have to say cycle paths are not my favorite place to ride. You are either on and off your bike all of the time or you find yourself being directed to ride down the inside of traffic and are putting yourself at risk of cars turning left across you. I can't help thinking that the money spent on cycle paths would be better spent educating drivers to be more respectful of the humans that choose to ride a bike on the road, as they are perfectly entitled to do.

Anyway, rant about cycle paths aside, I enjoyed the first few miles. The one thing that I did see that surprised me was a guy flying a falcon of some sort in what seemed to be a school field. Strange.

Something else that I wasn't expecting to see was a red squirrel but I ended up spotting 2, which was a nice surprise.

The cycle path problems continued for me latter in the day. Just before Keswick the offical "road route" directed me up a forest trail. The surface was very rough so even when the gradient was flat enough to ride I found more often than not I had to walk. I must have walked about 8 miles out of the next 10 and I was starting to get really wound up that this was suppost to be a cycle route. The off road route was also giving my spokes some trouble. Two in particular kept coming loose so when I eventually got back onto some tarmac I looked at my map and decided that I could no longer trust the sustrans route, from now it was going to be main roads all the way back to penrith.

The tarmac roads were much better, I had no troble with traffic and found that several other cyclists had done the same as me and given up on the sustrans route.

I got back to the b & b before everyone else which suprised me. I had a quick shower then went out to get some food before having another early night.

Looking at the route profile this was the day I had been fearing. The main climb of the day was up and over Hartside pass. On my road bike I would have looked forward to this as I am actually fairly good on hills, but pushing the penny up the hill wasn't going to be too much fun. As it happened the climb was tough but I started early and was soon at the top. The cafe was open and I was now confident that I could complete the c 2 c. People in the cafe couldn't believe that I had riden / pushed the penny to the higest cafe in England, but there I was. I was soon joined by other cyclists, two of which had stopped on the way up the hill to resuce some baby foxes that they had found on the road. The foxes were now in their ruck sacks and on route to a wildlife centre that they had been directed to. The other strange thing about the two fox rescuers was what they had planned on sunday. They were booked in to do the great north run and were going to cycle to the start. It was now about miday on Saturday, the run started at 9am sunday. That gave them 21hours to fit in some sleep and to cycle 50 odd miles to the start.

The descent off Hartside was good and I was able to ride most of it. The day still had a bit of climbing though. At one point my gps told me I was at 2200 feet. The only problem I had today was the old favorite, the loose dog. It came running out of a garage and I was in two minds as to weather to stop and risk getting attacked, or to try to out run it. On a normal bike I would have sprinted away, but I couldn't risk getting a dog stuck in my spokes so I bravely jumped off and faced the beast. Luckly once off the penny the dog lost interest and I was able to continue on my way.

When I got back to the b & b I checked out the stats from my first two days, they made quite impressive reading. 91.46 miles, with a total ascent of 7170 feet! My average speed was less impressive at only 7.4 mph. But considering the long off road walk on day one and todays hills it wasn't too bad.

That night I went out to find some food with Craig, one of the guys doing the trip on a normal bike. We ended up in a small pub which was the only place in the village doing food. In the pub a local guy started talking to us, he was quite interested in the bike ride but seemed even more interested in telling us about his adventures. If he was to be beleived these included a four month road trip through south america, including staying at the highest peak in the Andies. The tales may not have been completly true but I do think they were based on actual events, and to be fair everyone like to exaggerate a little.

As the night went on the pub became very busy and it turned out we were in for a real treat. The locals were having a vegetable auction! These were no ordinary vegies, but prize winning giants. Leaks the width of telegraph poles, Carrots that were more like orange snooker cues and onions the size of footballs. Unfortunatly my camera was back at the b & b, there was only one solution, we would have to buy something! We asked at the bar if we would escape alive if we were to bid for a prize winning leak, the advice we got was to wait untill one of the smaller ones. The result was a winning bid of £1.50 for a fourth placed onion. the photo of which is on the flickr link from this site.

While we were in the pub getting drunk the other members of the group were having some problems of there own. We later learnt that one of the other had gone off ahead earlier in the day and had not been seen since. The others were so worried about him they phoned the police, who in turn phoned mountain rescue.. Luckly, just before the rescuers had been activated the missing rider showed up, a little embarrased after getting very lost.

Even though today was suposed to be easy I still decided an early start would be a good idea. So after my breakfast I was under way at 8.00am. As it happened Stanhope seemed to be possitioned at the bottom of a huge hill so the first hour saw me pushing the penny more than riding it. The riding then got much better as the road pointed down hill for miles and miles. I did have to come off the offical route at the start of the Waskerley way as, yet again, the sustrans cycle route was more like a section of a mountain bike enduro.

The rest of the ride was fine as the surface on the last few cycle paths was good enough for me to ride. I was a little worried about riding through Newcastle but even the local want to be gangster kids loved the penny. I wouldn't have fancied riding a flash mountain bike alone through some of the estates though..

I got to the finish at 2.30pm, well before anyone else. After a few photos I then did the decent thing and found a pub. Talking to people in the pub they couldn't believe my journey, most people can't imagine riding a bike for one mile, let alone a penny farthing across the country. It was now that the scale of my achievment started to sink in. I realise that I'm never going to win an olympic event or a stage of the tour de france but today I did something that maybe only a hand full of people on the earth have done, in fact more people have probably walked on the moon than have done what I have this weekend, I RODE A PENNY FARTHING FROM COAST TO COAST!
Posted by Davep at 09:09