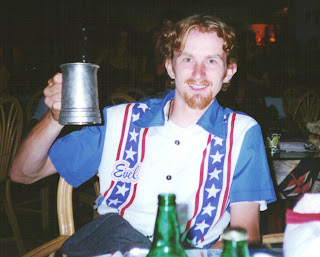 I've just found out that my hero, Evel Knievel has died. A sad, sad day. Evel was fantastic I can't really believe he's gone, after surviving crash after crash and a liver transplant I had started to believe that Evel was going to live forever.

It's getting quite late here but I'm going to come back to this post over the next few days and add some of my favorite Evel stories. For now all I can say is thanks for the memories Evel, and take care if you try to jump the gates of heaven!

I rode my motorbike to work today, a Yamaha xt660x, a bike that Evel would have approved of. I wore an Evel Knievel T shirt too. My route to and from work was chosen with Evel in mind. On the way I took a detour to go over my favourite hump back bridge..... On the way back I came through the city centre so that I had wheelie opportunities from traffic lights.

Anyway, as I said last night here are the some of the best Evel stories that come to mind, in no particular order, Enjoy!

1, Early in Evels daredevil days he performed a stunt where he would stand facing a motorcycle which would travel towards him at 50mph. Evel would then jump up in the air and the bike and rider would go underneath him. However, it didn't always work. On one occasion Evels timing was off and the bike hit him, as Evel lay on the ground he was covered with a blanket and was presumed dead. In fact he had "only" broken a few ribs. This was way back in 1966.

2, When Evel tried to jump 13 buses at Wembley he hit the last one and crashed. As normal, he broke various bones but he was up faster than a footballer with a slight graze to the knee, and then told the crowd he would never jump again. On the way to the hospital his agent asked him what happened. Evels answer was something like this, "Well my mother always told me to catch the last bus...".

3, That last quotes not bad but my favourite Evel quote has to be this one made as he is about to jump snake river canyon in a rocket powered bike. Evel knew he had no chance of making it to the other side, the three previous unmaned test flights had all failed and Evel had run out of money for further tests. However, as Evel had told his public that he would do the jump backing out was not an option. As Evel pressed the launch button he said, "God take care of me, 'cause here I come!" HERO.

4, I'm going to be doing this post for weeks, there is just so much to tell about Evel! Another good tale is one that landed Evel in prision. In short the story goes something like this. A guy called Sheldon Saltman wrote a book on Evel. Evel said the book contained lies about him and he wasn't happy about the content. To put this right Evel went round to see Saltman and broke both of his arms with a baseball bat. In latter interviews Evel Said things like, "It's hard to type lies when both of your arms are in casts" and also described Saltman as "the rottenest apple in the barrel and he deserved killing." Evel accepted blame and told the courts the truth about what had happened. When sentencing him the judge said he appreciated Evels honesty, but he could not encourage such behaviour. He was sentenced to six months inside. His jail sentence didn't please the toy companies, they said "All American Heros aren't suppossed to go to jail".

5, Evel was the best stuntman of all time and he knew it, he often said, "I don't care about these other so called jumpers. They don't compare to me. I'm the guy who invented car jumping."

6, When sitting in hospital after a failed jump, I forget which one, Evel confided in a friend and told him he knew he was not going to be able to make the jump. When asked why he went through with it Evels response was "What the hell was I supposed to do, give them their money back?" This guy was so tough!

The stories just go on and on. My advice to you is to go and buy the book Evel Incarnate by Steve Mandich. Good bye Evel, I'll miss you. 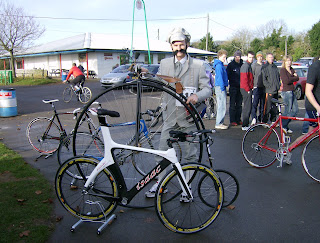 Well the weather was good and I ran myself into the ground to avoid last place. Provisional results can be found on www.dbmax.co.uk . I finished 185th out of 226. So I beat 41 people and my bike split time wasn't the slowest either.
For those who are interested, here are some stats.
winners time 42mins 54seconds.
my time 68mins 28seconds.
last place 89mins 30seconds.
my bike time was 39mins 35seconds, 6 people were slower!
My tactic for the race was always to run the first 2 miles as quickly as posible. This went quite well although I did have a few costume problems. My trousers kept falling down and my stick on facial hair got up my nose so my time of 13mins 52seconds for two miles, including change over onto the bike, was pretty good.
The bike leg was 5 laps of Castle Combe race track, which is roughly 10 miles in total. It's ideal for a bike leg as the circuit is pan flat and as smooth as silk. The other advantage is that it has no traffic on it so it's quite safe. I had some good support from the other competitors and the supporters durring my 39 odd minutes. I was cheered on by Les Bailey who is a family friend and very usefull runner and triathlete. Les had run in the earlier 10k race and had stayed on to give me some support which was great and I really appreciated it. Out of interest Les, who is at least 70 years old, ran the 10k in 46minutes and has won loads of international triathlons in his age group.
The final run was, as is always the case, very hard. For me it was quite good to have slower runners to catch up and I managed to pass about 6 people. I crossed the line in 1hr 8mins and 28seconds. I had aimed for 1hr 10mins so I was pleased with my time and I am sure that I couldn't have gone any faster as by the end I was feeling very rough!
So another event gets completed on the penny farthing, now I am starting to think about doing the big one next year, Lands end to John O'Groats.......
Posted by Davep at 11:55 No comments:

I've just found a video clip of me in action at the Much Wenlock Olympian games. The whole video is 11mins 57secs long, the veteran cycle race coverage starts at about 8mins 45 secs. Also on the video is a bit on the 7 mile road running race, 6mins in, which my Dad took part in. Anyway here is the link. http://www.virtual-shropshire.co.uk/shropshire_videos/video-wenlock-olympian-games-2007.shtml enjoy!
Posted by Davep at 12:06 No comments:

Last night I went to watch and listen to a world war II veteran, Fred Seiker, who was a POW working on the Thai Burma railway. I can't begin to describe what suffering this man has been through, It's a miricle that any of the POW's survived at all. Take a look at this link to an article written by Fred Seiker for more details. http://www.bmw.ukf.net/3pagodas/TBRandON.htm

Back on the penny farthing front, my trainning for the duathlon at Castle combe on the 25th Nov is going ok at best. I've managed to do something to my back and riding my normal road bike is quite painful. It doesn't hurt at all to run and I can only feel it slightly when on the penny, so hopefully It will be ok. There are almost 200 people entered in the duathlon now so I may not come last. This time last year I did the event on my time trial bike and finished in 55minutes, Using the penny I think It will take me about 1hr 10minutes. Last year this would have been well inside last place so hopefully I will be ok!
Posted by Davep at 10:13 No comments:

Penny gets the horn! 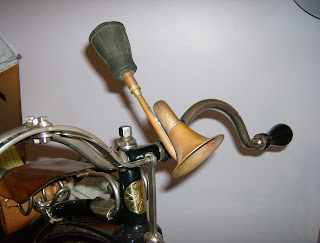 I've just come back from a classic motorbike show at Malvern where I managed to buy a horn for the penny farthing. There were loads of nice bikes at the show, I've put some more photos on flickr, so if you're interested take a look. The rest of my weekend has been pretty good, I got a copy of cycling weekly on Saturday and I was listed in the cyclocross results. Only a 10th place in a local event but even so it was nice to see my name on the pages of the magazine. I've been concentrating on improving my running fitness rather than riding the penny so I've no penny stories to tell but hopefully if I can do ok in the two running legs at the duathlon me and the penny will not come last! http://www.flickr.com/photos/10804338@N06/
Posted by Davep at 08:56 No comments: