prepairing for a 3 hour race on a penny farthing 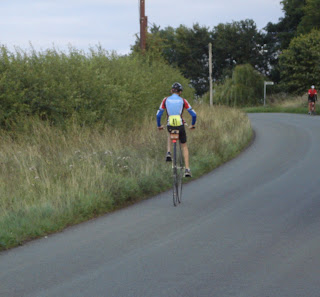 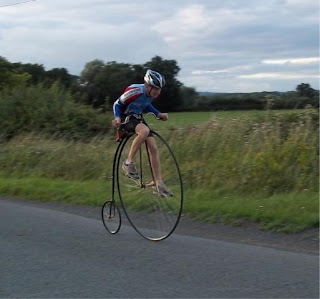 In a weeks time I will be making my way to Knutsford to take part in the Great race, a 3 hour road race for penny farthings. For most of the year I have not done any specific penny farthing training, I have been racing my modern time trial bike most weeks and running and swimming as training for my first triathlon. The triathlon was great, I was 11th out of 196 on the bike section, not bad for my first one! I was towards the back in the swim though, about 50th in the run and ended up 77th overall. My time trials have also gone well, I won the first 3 club time trials that I entered, however I think my best result was 18th in the 40 mile Beacon little mountain time trial. This is a really tough race and always attracts a good field. On the day the weather was quite windy too but I managed a personal best time of 1 hour 54 minutes over the very hilly course.

The last four weeks or so I have riden the penny more. I've tried an hour and a half at my estimated race effort which went well. I've done a ten mile trial on the penny and managed to average just over 16mph. At the end of that race I felt fine and I am sure I could have mantained that pace for at least 90 minutes.

Having not been up to see the course for the great race I am not sure how this speed will measure up on the day but I would think that I will be competitive. My target for the race is to stay out of trouble and in contention for the first 2 hours and then see what energy I have left. If I am able to go for the win that would be fantastic but as long as I feel I have given it my all I'm not going to be gutted if I get beaten.

This last week I was interviewed for a tv documentary to be shown after the Knutsford great race. I was asked all about my love of cycling and what I thought of my chances in the race.. To which I replied, I think I can win it..