Christmas on a penny farthing 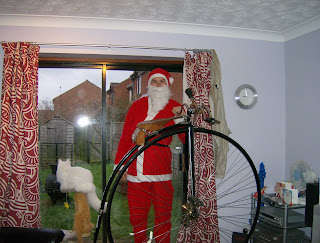 This is a picture of me dressed for my commute to work on Christmas eve. The journey was great, I must have riden most of it one handed as every car and person I saw waved at me so I waved back. I even got a wave of a policeman.
I also managed to do the Worcester St Johns time trial on the penny in my santa suit on Boxing day. My time was very slow, but it was great fun. A short video clip of me in action can be seen here, http://www.youtube.com/watch?v=8UPz5kmput4 It was taken by Mark, who rode the TT on a single speed mtb geared to 54" the same as my penny. I lost the race Mark did 34mins something and I did 49 mins ! So these new fangled safty bikes are faster, but they will never catch on....
Posted by Davep at 13:38 No comments:

What a joke! A suspected drugs cheat, someone who has served a ban for missing three drugs tests, is in the final 10 for this, Christine Ohuruogu missed a number of drug tests and served a short ban but is now able to compete again and could win this award.

In my eyes the only reason a professional sports person would miss a test is because they have something to hide. It's a joke. When you know your carear and reputation depend on it, surely you just get tested and then go home. To miss one test is careless, to miss three is unexcusable. It would be like me just forgeting to go to work, three times....

As I understand it she blames her missing the THIRD test on a change to her training schedule, but for me there is no excuse. She is one of the most fortunate people in the world to have a natural talant for sport and all she had to do was to turn up for a few tests. Now the BBC want to reward her for making a comeback!

Not only can she run again in little local events she is also able to run for her country in the Olympic games after she won an appeal to be able to do so.

I suppose the fact that she has a good chance of winning a gold medal in the Olympics has quite a lot to do with her return to sport, If she was just a mediocre cyclist you can be sure the ban would have been longer and the press would have buried her, and taken great pleasure in doing so.

If she is clean and did just forget to get tested or something then sorry Christine, your not a drugs cheat, just a stupid idiot, whose lack of respect for her sport should have seen her banned anyway.
I'M REALLY UPSET BY THIS, PLEASE DON'T VOTE FOR HER! THE END.

Excellent news, the drugs don't work. Last place to Christine, although it looks like Ohuruogu has 4481 friends. I was also pleased that Hamilton didn't win as his team have been caught cheating quite a few times this year, although not with drugs. Oh and well done Calzaghe!
Posted by Davep at 13:14 No comments: