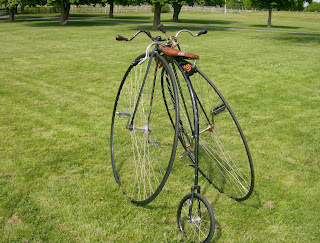 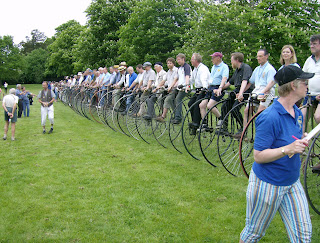 We needed 132 and managed 104 penny farthings, so the record didn't go. It was good fun though and quite a sight to see that many pennys together.

I drove down to the show on the Saturday morning so I had quite a long day. Not half as long a day as Kat had though. Kat had been away in Hong Kong and only landed at 5.00am on the Saturday morning. Most people would have gone home and gone to bed, but not Kat. For one Kat had no home to go to, but that's another story, and for seconds, Kat is not most people! (I meen that in a good way Kat)..

The Veteran bike show itself was a little odd, you could feel a bit of a divide betwen the owners of original pennys and the owners of replicas. It's strange really as we all have the same love of a strange bike, it's just some of us want to ride the things too and have bought replicas. I for one don't trust riding around 8 feet up in the air on 120 year old steel, and it would also be a shame to ride an original bike and watch it fall to bits. If there was no world record at stake I'm sure the replicas would have been asked to stay away.

Some of the owners of the old stuff were quite rude. One looked Kats bike up and down before saying "I used to have a cheep replica as well." Maybe he used to have friends too. We also received no help at all when ever we asked people if we could get some spare spokes from anywhere. I'm sure If we had turned up on original, older bikes, and if we were 40 years older ourselves, people would have been more helpful.

So when the penny stack was over Kat and I went for a ride and then went to a pub as the show at Beaulieu didn't have a bar!

All in all it was a fun day, although I'm not sure either Kat or I will be rushing off to join the veteran cycle club any time soon! If anyone wants to take a look at a few more pictures of the event, take a look at, http://www.flickr.com/photos/10804338@N06/ 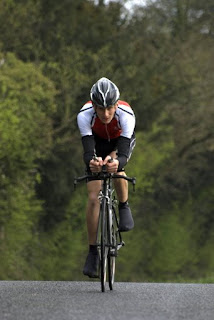 This is me, a few miles into the hardest time trial I have ever done! The little mountain tt is not to be taken lightly, it's over 39 miles long, has more than 3500 feet of climbing and includes two very steep climbs of over 17%. The first big climb comes at about 20miles the last one at 33miles. So the penny farthing wasn't really an option!

My time trial bike was almost the perfect tool for the job, fast on the flat and light enough up most of the hills, although bottom gear was too high (42/23) for the two big climbs.

My time was 1hour 58mins and 59 seconds, I was aiming to get inside 2hrs so I'm really pleased. Full results are on this web site.. http://www.beaconrcc.org.uk/open_races/lmtt/2008_results.html

Next week I should have some good penny farthing stuff to report on as it's the world record penny stack, so more on that next week..