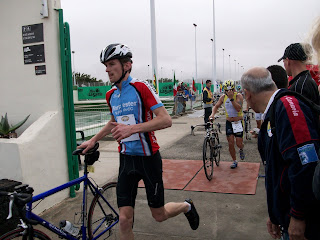 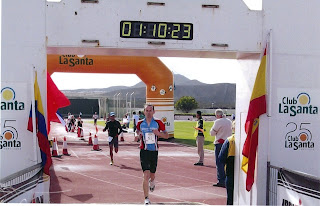 I have recently returned from two weeks in sunny Lanzarote where I competed in a duathlon. The event was organised at Club La Santa, a large sports complex that also holds the legendary Ironman Lanzarote.

I went to Lanzarote firstly to have a holiday and secondly to do the race. I did the same last year and finished 72nd, so my aim was to finish a bit higher this time. My build up to the event in England had gone really well. I had done a few cyclocross races and really concentrated on doing more running as last year I hadn't really done much and after the first run I was already a long way down the field.

I arrived in Lanzarote nine days before the race. On the first day I rode from the resort I was staying in to Club La Santa to register. The ride from Costa Teguise to La Santa is not an easy one. The two places are on opposite sides of the hilly, volcanic island. Last year I rode to the start of the race, raced and then rode back to the resort... This ment I had ridden 20 hilly miles before the race and worse, had to ride 20 hilly miles back afterwards. Needless to say it turned out to be a really tough day!

This year I was going to organise a lift to the start and back after the race. Then I could race as hard as I could with fresh legs and not have to worry about getting back on the bike to ride back.

I spent the days after registration but before the race riding my bike around the island, doing the odd short run and eating and drinking a less than purfect diet! I didn't do a huge number of miles in the week before as I wanted to do my best in the race. I rode around 250 miles and ran only about 6 miles. The cycling might sound like a lot but it's quite easy to rack up a few miles when you have all day to do so, and I wanted to enjoy riding in the sunshine.

Come race day I was feeling pretty good and planned to run the first leg quite quickly to get away with some of the faster competitors. I've done a few duathlons in the UK but they have always been non drafting events. This meens that on the bike leg you can't ride close up behind another rider to take shelter from the wind. When doing this it really makes a massive difference, the second rider in the line will use about 30% less effort to go the same speed. Non drafting events meen that usually the strongest competitor will win, when you can draft this is not always the case. In this race in Lanzarote drafting was aloud, so I wanted to get away with the faster competitors so that I didn't spend the whole of the bike leg dragging others along.

After a short warm up we were soon underway, the starting gun was fired by Chrissie Wellington, a World class athlete. See http://www.chrissiewellington.org/pages/index.asp for more details.. I started quite fast and settled into a pace that I could maintain. I ran the 5km in 20minutes 34seconds and felt good when I got on the bike. As I am a stronger cyclist than runner I soon found myself passing other riders on the uphill climb away from Club La Santa. I rode all of the climb on the big chainring and felt really strong. Two of the riders that I passed managed to follow me to the top of the climb and then passed me on the down hill run. I then got myself in to there draft for a while and took a breather.

As a group we then caught two more riders and became a group of five. I did a couple of short turns on the front but then found myself going backwards and dropping off the back. I wasn't too worried about this as I knew I could climb well. At the turn I was only about 20 metres behind them, the turn was very tight and was easier for a single rider than it would be in a group so I was soon back with the others and feeling good. I passed them all quite easily on the climb and none of them came with me. By the top of the climb I was feeling great and started to catch and pass other riders on the way back to Club La Santa.

Getting off and running after a big effort on a bike is never easy and when I first uncliped from my bike and stood up I was fairly sure I had overdone it on the bike. My legs were shaking and I didn't feel good. I changed into my running shoes and slowly jogged out onto the running track. Within a few metres of the final run I was being overtaken by others. I tried to follow them but all I could do was to limit my losses. After about 2 or 3 minutes I started to recover a little and was able to hold a gap to one of those who had come past me. The last run was only 2.5km so it was just a case of holding on for a few more minutes. I did the last run in 10 minutes 50 seconds, the guy who finished one place behind me did it in 8 minutes 53 seconds but I had taken 5 minutes and 4 seconds out of him on the 20km bike leg..

I crossed the line in 35th place, 13minutes behind the winner, and world Duathlon champion, Joerie Van Steelant. Last year I was almost 22 minutes down and in 72nd place so I was over the moon with my result. My splilt time for the bike was 22nd fastest, not bad considering I was riding a basic road bike that would have been at least 7lbs heavier than the top guys bikes and for most of the week I had been eating full English breakfasts and drinking lots of Lager.. I can still ride better than I can run, but the gap is closing.

The event was fantastic and very well organised, with a bit of luck I will do it again next year.