Pennies in the park. 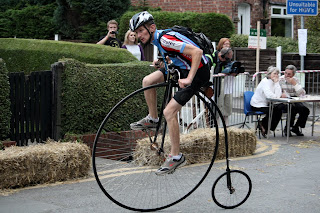 I've entered a one hour race for penny farthings on 11th september 2011. It's to be held in Matlock and should be a great event.

So far my trainning for the race has been a mix of normal cycling, riding to work on my fixed gear bike, racing time trials on all sorts of bikes. I've used my tt bike, my road bike, my tandem and I've done a couple of 10 mile events on my penny farthing.

I also rode my penny farthing out to a local round of the Rudy project time trial series at the weekend. I really enjoyed watching the event. Some of the performances by the disabled competitors were amazing, really inspiring stuff.

I'm not super fit at the moment but I think I should be able to put in a decent performance in the race. From memory I think I was 4th solo rider in Knutsford, I would love to go one better and get on the podium in Matlock.

The only other time I have raced in Matlock was for the 2008 national hill climb championship (on normal bikes). I wasn't great and finished just inside the top 100 (out of 150).

For anyone who wants to find out some more about the penny farthing race here are a couple of links.

Some time ago I rode my penny farthing from coast to coast (c2c) in England. I blogged about it at the time and now a little summary of my ride has made it into this excellent new book by Jeremy Evans.
http://www.cicerone.co.uk/product/detail.cfm/book/649/title/the-c2c-cycle-route
Thanks to Jeremy for putting my ride into his book and thanks to Cicerone, the publisher, for sending me a copy of the book.
I have a bit more free time at the moment so I plan to use the penny farthing more and blog more often to... I've entered another race on it, details to follow.
Posted by Davep at 00:29 No comments: