I won a local time trial last week! Hardly the national 25, but a win is a win! The route covered some small lanes around the area that my parents grew up. Part of the route went along a road that they would have cycled along to catch the scool bus, on this road my Dad once managed to knock my Mum off her bike and cut her chin open, what a charmer! Anyway, here is the results sheet... 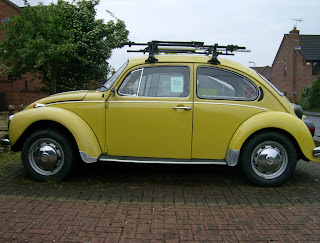 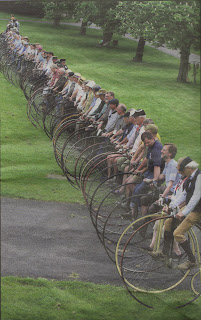 Firstly, the picture of the beetle is here as I have just sold it... I'm quite sad to see it go although the guy who bought it seems to be really keen so I'm sure the car is in good hands... Back to the national fame thing... The second photo is a scan of a picture that appeared in the Times on 14th May 2008. It's of the world record attempt that I have written about earlier in this blog. A similar picture was also in the daily mirror, but in much the same way that a royal flush beats a pair in poker, the Times beats the mirror in journalism!
Posted by Davep at 12:29 No comments: 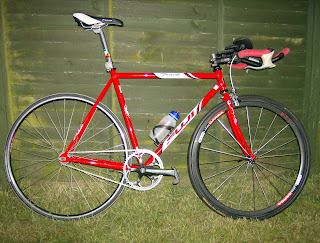 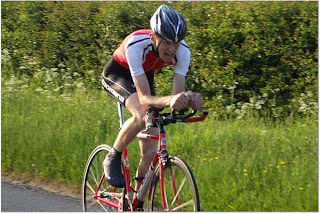 So this is what I came up with, It's a Fuji track bike with a few modifications.

- The standard front wheel has been replaced with the carbon one from my time trial bike.
- An old front brake from my first real road bike, with new cork brake blocks.
- Cut down handlebars from the same old racer.
- Added an old set of areo bars.

Appart from that its just a cheep steel track bike, but it rides really well. At the moment the gearing is 50 / 15, about 90" in old money.

It's been fun though and has opened my eyes to fixed gear tt bikes. Even with a basic effort like mine it's possible to post some decent times. I'm probably slightly fitter this year than I was last but even so on the fixed bike I'm only about 20 seconds slower over 10miles than I would be on my 20 speed areo, carbon time trial bike.

So drag that old roadbike out of your shed, convert it to fixed for a few quid and start showing people what a waste of money there flash tt bikes have been!
Posted by Davep at 23:56 No comments: