After a huge cooked breakfast it was soon time to set off on day two. This was going to be a longer day than our first one, we planned to get as near to the edge of Dartmoor as we could. It would be about 60 miles and as anyone who has cycled in Cornwall knows, its quite hilly. 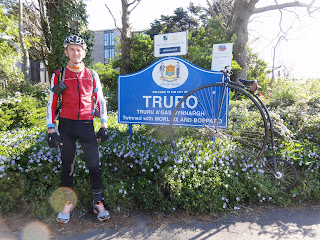 On the plus side the weather was now great, no rain anyway but we still had a bit of a headwind. We made pretty good progress over the first few hours. I had aimed to cover about 10 miles an hour but we were slightly slower than this at the moment due to the headwind. But all in all we were going well and confidence was returning after the hard start on the first day. 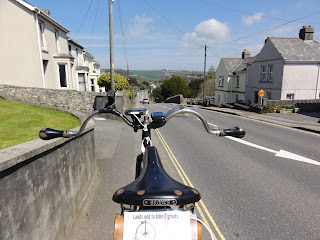 At about midday we pulled over and found somewhere to buy food. At this point in the journey I was almost forcing myself to eat before I was hungry. The massive breakfast had filled me up but when you are exercising all day hunger can suddenly catch you by surprise. In 2003 me and Mickey did LEJOG for the first time. It was a very steep learning curve for both of us as we had never taken on a long cycle tour before. On day 2 in 2003 Mickey found out the hard way what happens when you don't eat enough. In the middle of Dartmoor he completely ran out of energy and could hardly keep moving. From that day on we ate loads, probably far more than we actually needed! 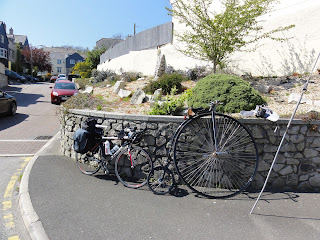 All in all day 2 this time around was an enjoyable day on the bikes, but we were both aware that day 3 would be harder, probably one of the toughest of the whole journey as we were returning to the scene of mickeys worst ever moment on a bike from 2003, we were going straight over Dartmoor. 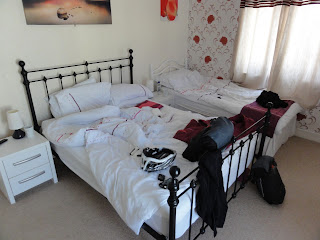 After almost 8 hours cycling we found a nice b&b that also had storage for our bikes and we went out for yet more food. 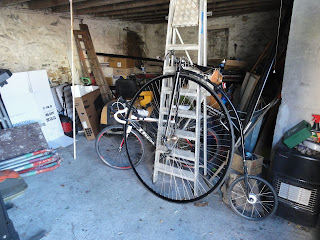 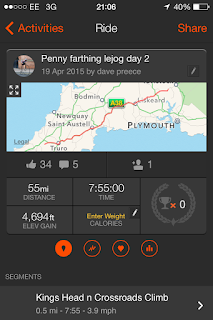 As I've at long last worked out how to insert pictures into this blog, this seems like a good time to use one.. After a long winter of hard training April the 18th finally arrived and it was time to put my money where my mouth had been for the last year or so. I felt as well prepared as I could be, I'd been training hard and I hadn't picked up any injuries. I was pretty confident that baring accident or mechanical breakdown I was going to complete the journey. I knew it was going to be tough at times but I was trying to focus on one day at a time.

At 4:30am my cycling companion and best friend arrived to pick me and my bike up. the bikes were loaded on to the car and we were underway, this was the easy part.. 70 mph in car trying not to think about how slowly I would be moving in a few hours time!

Every year hundreds of people ride from Lands end to John O'Groats and most of them choose to raise money for charity. Although my choice of bike may have been unusual I was no different to lots of others and I choose a charity to raise money for. There are hundreds of worthy charities but the choice of who to raise money for was an easy one for me. My wife was born deaf and when she was growing up she had a lot of help from the National deaf children's society. It seemed only right to pay them back by raising money for them. I am very proud of my wife and how she copes with everyday situations that most of us take for granted. Ann has a great job and lots of good friends. The combination of a very supportive family and the help and advice from the NDCS ensured that Ann now has a beautifully normal life.


On the way to lands end BBC radio Cornwall had got wind of my planned journey and the phoned me up on my moblie to ask about it. I ended up doing a live interview while we were on our way to the start. They wished me luck and the general consensus of their listeners was that I was going to need it!

When we finally got to lands end the weather was awful, rainning, blowing a gale and to make matters worse the wind was going to be against us all day. But there was no turning back now. A couple of people who had heard the radio interview gave me some sponsorship money and wished me well and with that i signed the start book, did the photo by the signpost and in front of a big group of tourists I climbed up onto the bike and made my way out of the car park.

The head wind was awful! I could hardly keep the bike moving but managed to get out of sight before taking a rest, 1 mile into my planned 1000 mile journey. This wasn't good, not the start I had hoped for! The ride to Penzance was very stop start as the wind just didn't let up. Eventually we found a bus shelter to take a rest and eat some food before moving on. 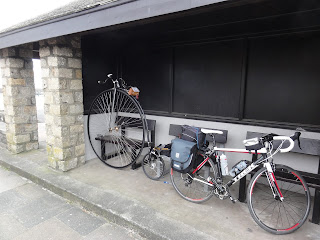 Being up in the air on a penny farthing is not really suited to windy conditions, on a bike of any kind headwinds are bad news. When you and your bike have the aerodynamics of a block of flats its as bad as it gets. This was so much harder than I had hoped for but we kept plugging away and soon started closing in on our first night accommodation. 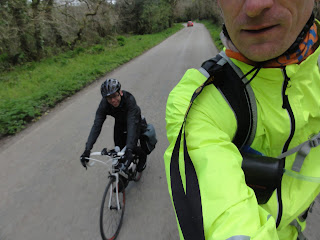 As the day went on the weather improved a little, it remained windy but at least it stopped raining. We had booked the first night in advance as we were not sure how the day would pan out with having to travel 250 from home to lands end. We had to cover a reasonable distance on the this first day as both of us had only been able to book a certain amount of time off work. So after a hard 5 hours on the bikes and an early start with the traveling we were glad to get the first bit of the journey done.

Day 2 would be a harder days cycling with more miles covered but at least we could start early to take the pressure off. From now on we would cycle for as long as we could each day and then find somewhere to stay. We weren't going to book any accommodation in advance as we really didn't know how far we could get each day. 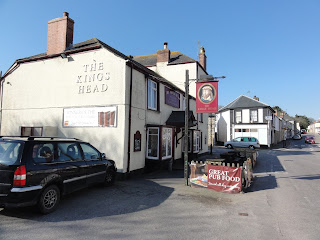 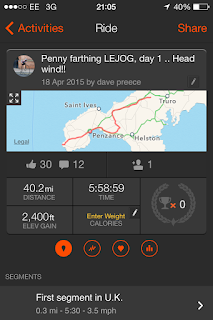 Lands end to John Ogroats by penny farthing, at long last, I've worked out how to blog from my hudl!

It's now over 8 months since I cycled the length of the country on my penny farthing. It's taken me that long to work out how to blog from this device, but here we go.. The full report on my journey starting with.... The next post...
Posted by Davep at 09:06 No comments: