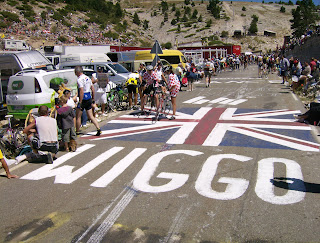 I have just spent a fantastic weekend in France for the Tour. I went to watch on Mont Ventoux, the hardest climb in France.

The day before the race came up the mountain I rode up it on the same road. It was an amazing experience. The first few km ar actually not that hard, at one point I was even in the big chainring, but not for long!

The climb is about 21km long at an average gradient of about 9%. I managed to get up it in about 1hr 44mins and felf ok at the end. The outright record is about 55 minutes...... Different class.

Anyway, on race day we walked from our tent, which was on the roadside at about 14km from the top, and watched from about 7km from the top. We had a great spot, The highlight for me was when David Millar came past us. He looked almost dead but when he heard our support he managed to raise a hand from his handlebars and nod his head in apreciation of our support.

Millar had a good tour, he got into a few break aways, almost won a stage, did well in the time trials and road himself into the ground in support of Bradley Wiggins. Wiggins was a incredible, 4th overall and never out of the top 10. Sometimes a rider gets a bit lucky and finds themselves in a breakaway that gains 25 minutes on the main group. They then find themselves in the top ten for a while, but Wiggins started like a freight train and just kept going! Seeing him going wheel to wheel with Armstrong on Ventoux was fantastic, and to finish 4th in the strongest tour line up for years was just ace!

Of course there were other british riders in the tour, Charlie wegelius was there to help Cadel Evans in the mountains, but Evans couldn't stick with the other big hitters. There was also a guy called Mark Cavendish, a sprinter from the isle of man. Cav did ok..... He won 6 stages, but somehow managed not to pick up the green jersey for the best sprinter?! The way the points work for this are a bit silly, so on Ventoux we made our own little comment about this. On the mountain stages people often write words of encouragement on the road for the riders. So we wrote, Cav 5, Hushovd 1. In referance to the number of stages that each rider had won at this point. Cav went on to win in Paris for 6... but Hushovd still won the green jersey!

Anyway, Cav is the fastest bike rider on the planet, Millar was awesome, Wegelius rode a good solid tour and Wiggins was fantastic! Not that they are going to be, but if any of the british tour riders are reading this, thanks for making it the best tour I can remember! In 2010 I want Millar to win a tt, Wegelius to win a mountain stage, Cav to win 7 and Wiggins to win the overall!