We were both really looking forward to our first full day of cycling in Scotland and although the weather forecast was dreadful when we woke up we were greeted with clear blue sky.

Our first few miles of cycling were on nice quiet roads that were pleasing flat. We cycled on at a slow pace, enjoying the peaceful surroundings and stopped frequently to take photos. 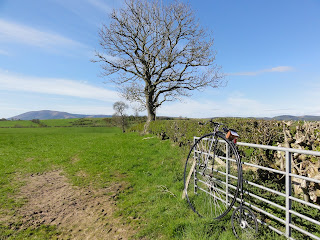 After about an hour on the road we spotted our first cyclists of the day. The road was long and they were some way off but they were cycling towards us. The reaction I got from other cyclists was usually one of surprise and this time was no different. They were really pleased to bump into us as they had been following our ride on social media. A few of the other cyclists we met along the way had also heard of our ride but this couples story was a bit different as I knew of them as well.

Here we were, 500 odd miles from home and I'd bumped into Mark and Anne Brazier. My link to them was through a mutual friend, Simon Wix. It's complicated, but the shortened version ( and even this isn't that short) of how we knew of each other goes a bit like this.

One November Simon, who i knew through competing against him in local time trial cycle races, was cycling some huge distances each day in a bid to become the rider with the highest monthly total of mileage in the world. At this point i didn't know Mark or Anne. Simon was uploading his rides to the web site strava and competition for the top spot was fierce. To start with the top spot was changing hands between about 3 or 4 riders from all areas of the world. After about a week the battle for the top spot looked to be btween two riders, Simon and one other guy. I was looking at the web site every day to see how Simon was getting on and after about another week of watching I noticed something strange.  As soon as Simon uploaded his ride for the day his main rival would immediately post a ride a couple of miles longer. Sometimes Simon would go back out and do another ride, and we're not talking about a spin around the block. He was doing 150 miles and then doing another 50 odd in the evening to try and stay ahead. Even after doing this his rival would always post another ride to beat him. After about a week of this it got even stranger, the rival rider started to post exact duplicates of very long rides, sometimes 200 miles plus. It looked to me as if the other guy was somehow uploading rides without actually riding them and Simon was almost killing himself in an attempt to keep up. So I posted on my Facebook page and asked friends to take a look to see if they thought it was suspect. Everyone did, so I contacted strava and asked them to look into it. To cut an already long story short, independently Mark Brazier was also lobbying strava to investigate and a combination of both of us pressuring them got them to look at it. It turned out the rival rider was actually not cycling anywhere near the distances it appeared. Strava were able to tell from the data he uploaded that he was faking his rides and Simon had been cycling himself into the ground to beat this Muppet. anyway, Simon won the competition fair and square after looking like he was going to miss out and he thanked me and Mark for getting involved. Simon put us in touch with each other and we became friends.

Mark and Anne are serious mile munching cyclists, they do far more miles in a year than I do but they were seriously impressed with my progress on the penny farthing. To get recognition from people like this was great. After chatting for a while Mark shared with us his advice on how to avoid the worst of the forecast bad weather. His advice was to stick to bus routes as the roads will be gritted and ice free. Bus routes also bring bus shelters that we could take cover in. Other places he suggested that would make suitable shelters included domestic wheelie bins, hopefully we wouldn't get that desperate! 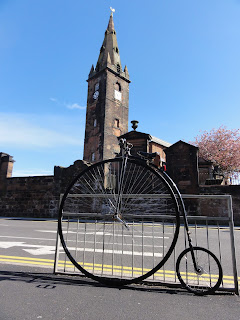 Everyone kept telling us the weather was going to be bad but that seemed hard to believe, as we cycled through Dumfries it was a beautiful day and the miles were rolling past with no worries at all. 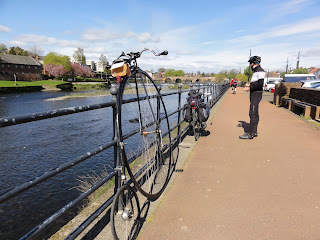 We soon passed into another county, my bikes problems from the lake district were a distant memory and apart from a little saddle discomfort I was having a good day on the bike. My average speed was good at just over 10 mph and I felt the best I had in days. I had become so used to riding the penny farthing it didn't seem unusual to me at all. I was really enjoying the ride today, then it started to rain. 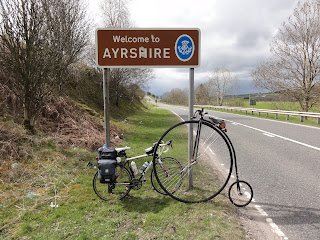 The rain got heavier and it suddenly went very cold. We were on fairly busy roads at this point and the traffic had managed to split us up. Mickey was somewhere in front of me so I kept pushing on, keeping a look out for him in bus shelters and wheelie bins.
Then things went from bad to worse, it started to snow. The temperature had dropped and there was still no sign of mickey. I was sure I hadn't cycled past him so I continued on. We had covered about 50 miles at this point so we were some way short of our planned stop at 70 miles. It was too cold to stop riding and with no cover I rode on. Eventually I came across a bus shelter so I pulled over and phoned Mickey. Somehow I'd managed to cycle past him, he'd been waiting for me in a bus shelter that I hadn't noticed and somehow I'd cycled past him without either of us realising.
We decided the best thing to do was for us both to continue to ride, I would stick to the main road and go 8 mph or so and Mickey would at some point catch me up. So we both rode on alone, in the snow, for about an hour before we regrouped, both cold and wet and in a bad mood. 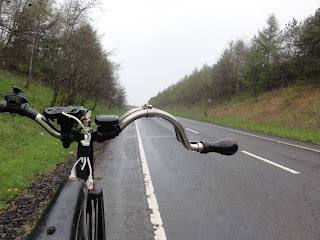 We both had enough for the day so we decided we would stop in the first accommodation that we passed, this turned out to be a travel lodge on the outskirts of Kilmarnock. We were both ready to stop, it had turned out to be a really hard day. The terrain wasn't a problem but the cold conditions had really taken it out of me. I was so glad to get out of my wet clothes and into the warm shower. Then it was time to eat. 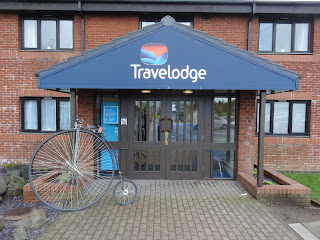 The travel lodge kindly let us order some Chinese food to be delivered to our room, Mickey walked across the road to a garage for beers and we were set up for the night. I don't think I have ever eaten as much as I did that night. After the food I lay in bed unable to move, but I was warm and dry and I was one day closer to John O'Groats. 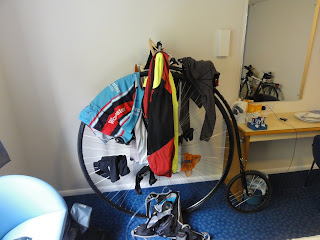 My attempt to dry my 10 day old, wet and smelly cycling clothes. 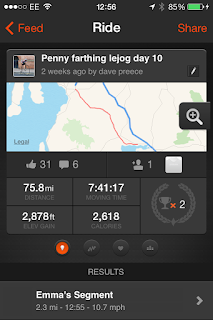 Another day done and dusted.