After another brilliant breakfast we got ready to leave for our final day on the road. We hadn't asked how much the b&b was going to cost us but after 2 weeks on the road we had a fairly good idea. We were in for a shock, everywhere we stayed had been good value, but a new standard was about to be set. They were so impressed by our journey all they asked for was a token amount to go towards paying for our breakfast!
We paid our tiny bill and said our goodbyes, hitting the road feeling slightly guilty that we'd been treated so well and for so little payment.

As we rolled out of Helmsdale we once again chatted about how we would celebrate in John O'Groats. We were both excited about finishing the ride and I for one was really looking forward to a lazy day tomorrow. 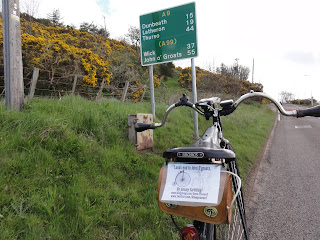 Seeing the signpost for John O'Groats was a lovely moment, I guess lots of cyclists probably have a photo similar to the one above. 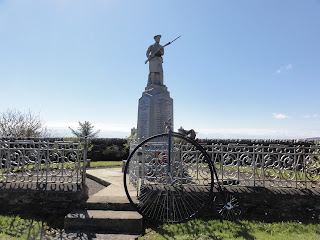 The road away from Helmsdale was a tough one with lots of hills that were too big for me to ride. Our progress was slow but it was a beautiful morning and today's distance was short so we didn't stress about our tortoise like average speed. We walked a bit and cycled a bit, stopped for a few photos and gradually made our way towards John O'Groats.
At one point we cycled through a police speed trap, I was clocked at 9 mph so no further action was taken! We had a brief stop in Wick for food and also posted a few photos on Facebook. I tweeted an update with our ETA in John O'Groats and then we moved on. 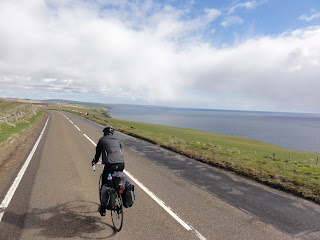 The road leading from John O'Groats was busy with fresh faced cyclists who were just starting out on their end to end adventures. I was excited for them but glad my ride was coming to an end. It had been a hard two weeks of very long days in the saddle. One of the cyclists just starting out had been following my penny farthing ride on twitter and when he spotted me he stopped for a chat and a photo. Embarrassingly for me I was pushing and not riding my bike when we met. The hills were too much for my tired legs, the final day was proving to be a tough one. 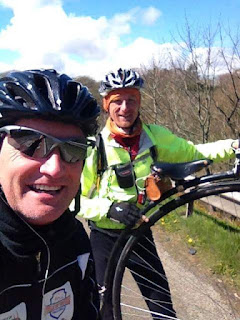 Above is the photo Jason took and later emailed to me, his ride went well and I think he finished inside 9 days. Like a lot of end to enders he also raised a huge amount of money for his chosen charity.

At this point my fundraising was also going well, my just giving page was at around £2000 with donations coming in from friends and strangers alike. I even had one anonymous donation for £100.00. I thought this was incredibly generous, Mickey thought it was more likely that they had intended to donate £10.00 but had put the decimal point in the wrong place. 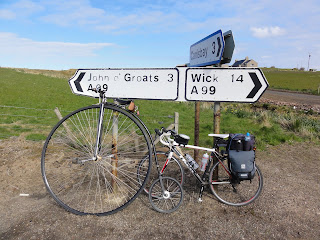 Our tired legs eventually passed the final signpost to our target and the efforts of the last 2 weeks were soon to be rewarded, I couldn't wait to step off my bike for the final time. 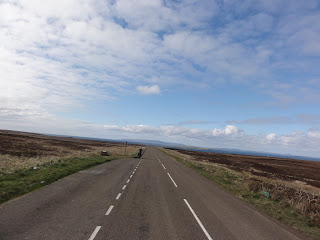 The moment when we eventually rolled into John O'Groats was a memorable one, Mickey captured the moment on camera and our ride was almost complete. There was still time for another surprise though. The first building that we passed on our way into the village was the John O'Groats guest house, the b&b that we were due to stay in that night. As we approached we could see some people outside of the building. The owners of the b&b were waiting to welcome us, and even better they popped the cork out of a champagne bottle to greet us! It was such a nice gesture and a memory I will never forget. When me and Mickey finished our first end to end in 2003 I remember John O'Groats as being a bit of an anticlimax but this time it really was a warm welcome at the end of a very long road. We stopped for a few minutes before being encouraged to carry on and get that final photo by the famous sign post. 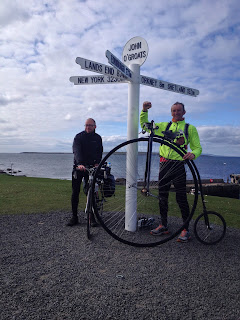 So there we have it, 970 miles and 15 days after we set of we had made it! I was now in a rather exclusive club of people who had done the end to end on a penny farthing. It's not clear how many people alive today have ever done this but from my research I think it's only about 10. It's an achievement that I am very proud of but I'm also fully aware that without Mickey's help I would never have made it, so I owe him big time. All those years ago when I first bought the bike I said one day I would do it and now I had achieved it. All that was left to do was to let people know, I phoned my wife, tweeted a photo and uploaded my final day to strava before sitting down for a coffee in the cafe.

My phone then started to go wild! I was getting text messages from friends and tweets from all over the world! Notifications from my just giving page were coming in so regularly it was starting to flatten my battery!

There was only one thing left to do, get back to the b&b to start the celebrations! 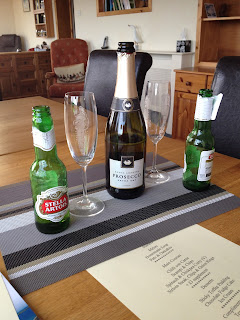 Our hosts welcomed us back like long lost friends and after a quick shower we were treated to some fantastic home cooked food with the other guests joining us at the table.
The company was great and the beer had never tasted so good, our ride was done and at last we could relax. It was the perfect end to our adventure. Looking back on the ride now I have some fantastic memories but this final night really stands out. Mary and Mark at the John O'Groats guest house could not have done any more to make us feel welcome. Of all of the places we stayed, and we stayed in some brilliant ones, this final place was easliy the best. If ever you get the chance to stay here you really should, one day I hope to travel back to see them, but when I do you can rest assured I won't be cycling there on a penny farthing! 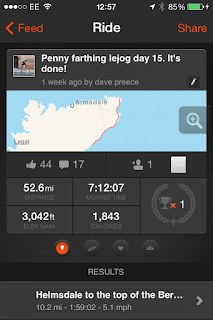 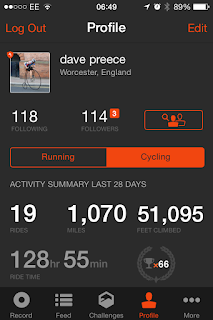