After a great nights sleep and another huge breakfast it was time to pack our panniers again and get back on the road. It was less than 12 hours since we had checked into our room and now we were leaving it but the sun was shining and I was keen to hit the road. Today our route would take us through Knutsford and as anyone who is into penny farthings knows this is a very good thing. I say this as Knutsford is home to the world's first penny farthing museum. So it would make a great place to stop for a break and take a few photos. 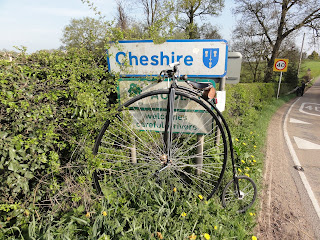 On route to Knutsford we stumbled across a nice quiet cycle route. Now I'm not normally a big fan of cycle lanes as they are often covered in broken glass but on the solid tyres of the penny farthing this would not be a problem. Fortunately for my friend , Mickey, this cycle path was really good and he escaped any punctures. In fact so far on our journey neither of us had had any mechanical problems of any sort. 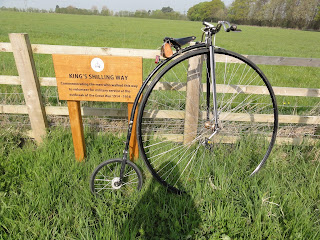 The cycle path then rejoined some minor roads before a couple of main roads led us into Knutsford. Knutsford seems to be a wealthy place, I say this as the first car garage we saw was a McLaren dealership that had an F1 car in the window. But we weren't here to see that, we'd come for something far more valuable. If you ride to the penny farthing museum on a penny farthing they will give you a free cup of tea and a slice of cake! 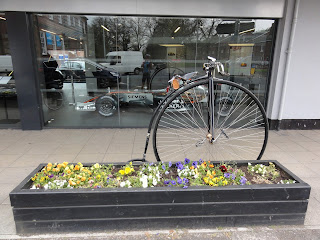 The museum is part of a lovely cafe so we parked up and I claimed my free drink, we bought a sandwich each and chatted to the people there about my journey. A few road cyclists were also there, stopping off for a rest on a 50 mile ride. They couldn't believe I was cycling the length of the country on my bike. I think they thought I was mad, as to them cycling was all about having the latest carbon framed bikes and lots of flash kit. Their bikes were probably worth more than my car but I wouldn't have swapped them for my penny farthing. 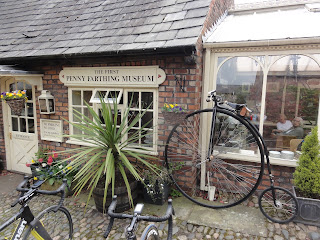 Inside the cafe there are penny farthings everywhere. Previous readers of this blog might remember that Knutsford is home to the Knutsford great race, a 3 hour long race for penny farthings that is only held once every 10 years. I rode the race in 2010, riders came from all over the world and I managed to finish as 4th placed solo rider. I'd only had my bike about a year so I didn't do too badly. In 2020 I'll be a bit old at 47 but I fancy my chances of going at least one place better and getting on the podium. If I get lucky and have a magic day I might even go a couple of places better than this. 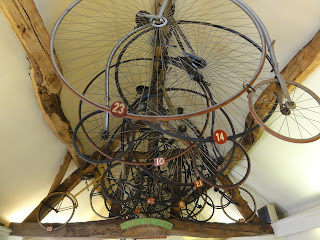 After looking around the bikes and taking some photos, including the one below of a signpost to lands end and John O'Groats, we cycled on. I was keen to finish a bit earlier tonight as I felt like I could do with a rest. Our schedule was so tight that we hadn't got the luxury of taking a day off as we both had to be back at work almost as soon as we were due to finish the ride. 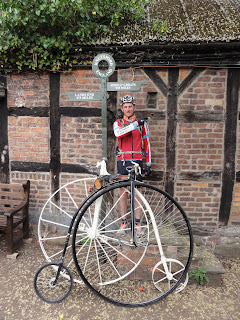 The penny farthing theme continued as we cycled on, this lovely model was in the middle of a new traffic island. 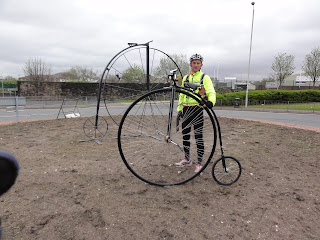 After a slightly shorter day we spotted some accommodation in the form of a premier inn. We asked if they had a room and they did so we called it a day and checked in. There was a pub across the road so after a quick shower we headed over for food. 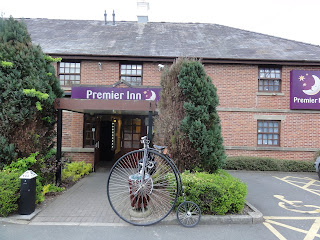 It had been another good day, we'd managed to cover almost 70 miles but in much less time than yesterday. We'd still been on the road for over 8 hours and all this exercise was making us hungry, really hungry. The pub we found ourselves in had a good looking menu with an interesting section entitled "challenge meals". These meals claimed to contain so many calories that they were almost impossible to finish. Now I like a challenge and so does Mickey so we ordered two meals, a couple of beers and set about our task. I was confident I would finish mine, but then it arrived. It was the biggest burger you have ever seen! I wish I had taken a picture. The challenge was on. I battled through about 75% of mine before stopping for a rest, Mickey however was not about to be beaten and he pushed on. I tried to eat some more but I was finished, while Mickey just kept on going until there was nothing left!
It was a great victory for Mickey, he could hardly move from his chair when we got up to leave. He looked a bit like a boa constrictor that had just eaten a zebra but he had the victory and that was all that mattered! 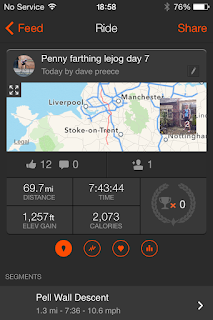