After a good nights sleep in my own bed I was ready for another long day in the saddle. On the subject of saddles I had chosen a leather brooks b17 for this trip and so far it was proving to be a wise choice. Usually one of the first things people would ask me about how I was coping on the ride was " how's your backside doing?" And so far it was fine. The brooks b17 also looks ace, especially the one I've got as it has nice copper saddle rails and it really looks the part on my penny farthing. 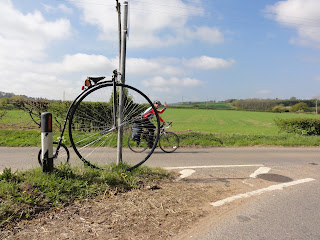 My cold didn't seem too bad this morning, so after an early breakfast we were soon on the road. We started the day by cycling to worcester royal hospital, which is Mickey's place of work, for a few photos with the local press. After chatting to them and some of Mickey's work friends we then met up with some member of Worcester St Johns cycling club. They had turned out to ride a few miles with us. It was great to have some fresh company. It helps to pass the time to have people to chat to and I really appreciated them turning out to cycle with us for the first hour of another long day. 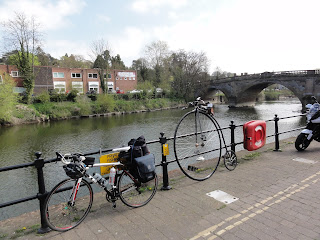 Although my home county of Worcestershire doesn't have the biggest hills in the country the roads are quite undulating and the morning ride from Worcester to Bewdley was hard going on the penny farthing. I was having to walk up some of the hills as my knees were still feeling sore. I figured it made no real difference to my average speed if I walked up at 3 mph rather than working really hard to ride up at 5 mph. I was slowly coming to terms with my slow pace, in fact I had almost forgoten what a normal bike felt like. When I was walking I could also eat so this was useful to top up on energy for later in the day. 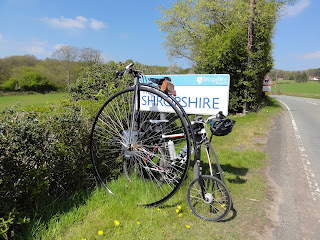 We rolled slowly out of Worcestershire and into Shropshire, still in lovely sunshine and on nice quiet roads. After trudging down the A38 all day yesterday it was nice to be back on minor roads. The scenery was great and the lack of hgvs trying to kill us was welcome. 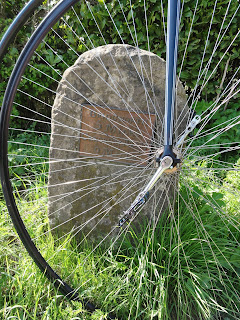 When we had looked at the route for today it didn't look that hard, but I was really starting to feel the effects of the rolling terrain. After about 60 miles we decided enough was enough and we turned our attention to finding somewhere to stay for the night. As with the rest of the journey we hadn't pre booked any accommodation as it was impossible to tell how far we could travel each day. However, we had planned our route to take us through towns and villages that had places to stay towards the end of each day. So far we had not had too much trouble finding somewhere to stay and we'd found a b&b each day by about 6 pm. Today was proving more difficult. All the pubs we cycled past were either full or didn't do b&b and there were no hotels for miles and miles. We stopped to check the map at 7 pm but it wasn't looking good. Nowhere off our route looked anymore promising so we turned to the internet. I was fine for signal on my phone and it was fully charged as it was connected to a charger that ran off a dynamo hub on the rear wheel of my penny farthing. I'd built the wheel myself and so far it was running really well, it still looked the part as I had removed all of the markings from the hub and disguised the wires. The tyre was still a solid one so at first glance it looked fairly authentic. It might not have been very original to the bikes history but it was extremely practical! Unfortunately a Google search for accommodation didn't help so we counted out our remaining food supplies and decided to eat half of it, switch our lights on and prepare for a difficult night on the road.

As we cycled on we started to come to terms with our situation and I'd almost convinced myself that it was in fact a good idea to keep riding, maybe we could even cover 100 miles today.

At about 9 pm we rounded a corner on the now dark country lane and in the distance we could see some lights coming from a large building. It might have just been a big house so we didn't get our hopes up, but as we got closer it became apparent that it was a pub. At worst we could stop for food and then cycle on, at best they might have a bed for the night. We turned into the car park, got off our bikes and went inside. I asked if they were still doing food and they were, then the million dollar question.. "Do you do B&B?" the reply was YES!!! We'd hit the jackpot, lady luck was shining on us again. 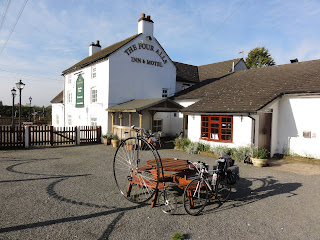 It was too dark for a photo when we arrived so here's one I took the next morning. I've never been so pleased to find a bed for the night! 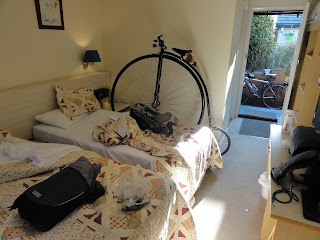 So another long day in the saddle came to an end, today we were moving for over 9 hours 30 minutes and on the road for almost 12 hours. To say I was tired doesn't really do it justice! After a shower I felt a bit more human and after a huge meal in the pub and a couple of beers I felt great. We came close to being without accommodation tonight but it turned out fine, so far we had been pretty lucky and everywhere we had stayed had been great. Hopefully that luck would hold for the remainder of the trip. 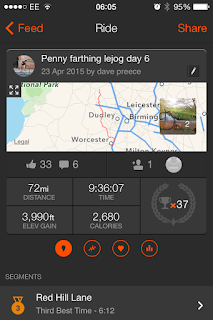 72 long, slow and hard earned miles. Now we had cycled away from our home town it really felt like we were well on the way to John O'Groats.