The plan for today was to get out of the city of Bristol and head towards my home city of Worcester, using minor roads rather than the main A38. As soon as I woke up I had doubts about the plan. I felt pretty dreadful, I had suddenly developed a cold. I had a really blocked nose and felt terrible. Also from nowhere my knees were really feeling sore. I was feeling really down in the dumps and having serious doubts about not only the day ahead but the rest of the ride. 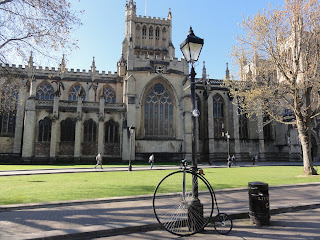 Fortunately the weather was still good and my traveling companion and best friend Mickey offered his encouragement and restored my confidence a little. After a magnificent breakfast in the lovely farm house we packed our pannier bags and hit the road. Our revised plan was to start slowly and just chip away at the miles, aiming to get at least 30 miles done, more if I felt better as the day went on. 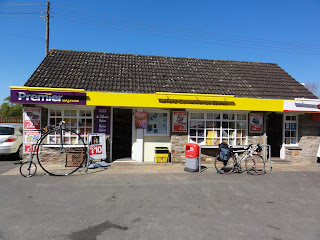 We made a slow start through Bristol, walking and riding through the heavy traffic and after about an hour we were clear of the city. I was still feeling awful so to make as much progress as we could we had a change of plan. We decided to stick to the main road, the A38 and just accept that today was just about getting some miles done and not really enjoying yourself on a more scenic route. 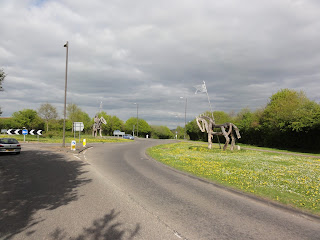 After stopping for a rest and some food at a small roadside store I started to feel slightly better. My knees were still aching and my nose was running like a train but I wasn't getting any worse so we push on. We were so lucky with the weather today, had it been wet and windy I'm sure we would have at best fallen behind schedule and at worse I may have been tempted to abandon the ride. As it turned out we made decent progress, Mickey was a great help today, chatting to me and helping to pass the time. Solo cycle touring would be so much harder. It really helps to have someone with you on the bad days and its great to have someone to share the good experiences with too. 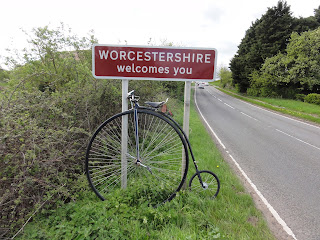 As the day went on we decided to keep riding until we reached our home city of Worcester. At one point in the day I posted a photo to my Facebook page and put a few rough details of the plan for the day. I thought nothing more of it at the time and we were soon back on the bikes and cycling slowly onwards.
It was a great surprise later in the day to see a familier face cycling towards me, Ed Dursley, a friend and fellow member of Worcester St Johns cycling club had seen my earlier Facebook post and calculated roughly what time to intercept me on my way towards Worcester. It was a real boost to my spirits to see Ed and to hear from him that loads of people were taking great interest in my ride. Soon the three of us were approaching Worcester. We had somehow managed to cover almost 70 miles today. When I got up that day I had doubts about doing half of that distance but as the day came to an end my confidence had started to return and I figured if I could do 70 miles feeling like I did today there was no reason why I couldn't do it again the next day.. And the next day... And.... Well you get the picture. 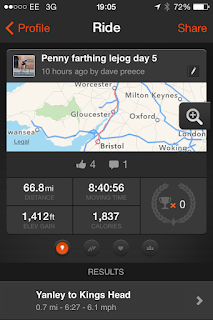 I have to say, don't trust the calorie counter on strava.... I don't think it's calibrated for penny farthings!
so we made it to Worcester and my reward was a night in my own bed. Just what my tired body needed!
Posted by Davep at 13:28