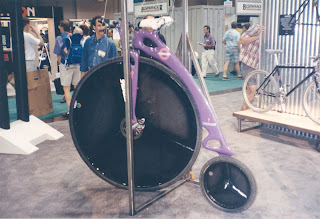 Firstly, check out this picture of what looks to be a time trial penny farthing... I don't know anything much about this bike, I just stumbled across the photo on the internet the other day. What I do know is that I want it, although it would have to be a very still day to risk riding it, that big front disk is going to be hell in cross winds!

Well I had a busy weekend, what with Simons stag do on Saturday and then the Halesowen track day on Sunday.However, I did manage a couple of rides on the penny farthing. The first was a short ride around the lanes on Friday night and I ended up in a local pub. Once there I had the usuall penny farthing questions put to me, how do you get on / off? Is that a solid trye etc. The one thing the bike does is get people talking to each other. I find it strange that people from all walks of life seem interested in it. It really does seem to bring people together. At one point I was talking to an old couple, who must have been at least 75, about the tensioning of the spokes. Then the next minute a group of kids on bmx bikes wanted a demo and soon the bmxers were talking to the old couple about the recent bombs found in London and the threat of terrorism! These groups of people would never have exchanged plesent words normally but now they seemed to be chating like old friends, weird, but quite cool!

The stag do was also pretty cool, First we went go karting, then we did the normal stag do activity, and went drinking. As the weather wasn't too bad I decided to ride the penny to the karting track. This ride was only about 7 miles from my house so that presented no major problems. In fact in many ways the penny farthing makes things easier. Car drivers actualy give you room, and wait for you at roundabouts and junctions. Rather than seeming to aim for you when on a normal bike they actually give you an extra wide birth when on the penny. This is probably for no better reason than they think you are sure to crash at any moment and that you might damage their car when doing so, but it's still nice to be given space on the roads. The one thing that I did notice on the way to the karting was the unsuitability of some of the local cycle paths. The council has done a good job round here with the surface, on most paths it's better than the road. However, the council had clearly not envisaged someone riding a penny farthing. At several points I had to get off the bike to go under overhanging road signs and trees. I suppose I can't really complain too much about this as I am riding a bike that was outdated over 100years ago! The go karting turned out to be fun. The rain made the conditions pretty slippery but if anything it added to the fun, oh, and by the way I won! The rest of the group then took a minibus to my local pub, the ketch, for food and beer. I joined them for this, again traveling by penny farthing, and then went on to a real ale pub,, the huntsman, in a neighbouring village. The rest of the group went in the bus and I was again the odd one out and went on the penny. At this stage the riding was still under control as I had only had a couple of drinks. One thing I did notice on this ride though was the amount of road kill, either headgehogs, badgers and rabbits are really stupid and can't help but get run over, or there are just loads of them and proability means that some of them are bound to get run over at some point. Either way it's a shame so many get squashed. Anyway, the drinking started in earnest in the huntsman, and after another 4 or 5 pints we moved on. I must admit I was glad to have an excuse to go home as I was already three sheets to the wind, being a skinny cyclist may have helped me when go karting but it was doing me no favours now we were drinking, and the others in the group had the luxury of the bus transfer to the next pub. This pub was some distance from my home, so I made my excuses and cycled home. I had an audience as I mounted the penny, so I concentrated hard on not making an arse of myself and rode off out of sight as quickly and as safley as I could. Once out of sight I must admit I begain to wobble and weave down the country lanes as I made my way home. I obviously managed to get home ok, as I am writing this, but I can recomend that drinking and penny riding do not mix! The journey home was quite hard work. Being drunk in charge of a penny farthing is not good for your life expectancy. I found every hill extra difficult and the amount of effort needed to peddle over 40lbs of steel had my heart and lungs working overtime. My control of the bike was fairly limited and it seemed to be going pretty much where ever it wanted to, I hit a few pot holes and at one point even strayed onto the grass but somehow I made it home.

The next day, complete with a hangover, I cycled to Halesowen cycle track. I really enjoyed the track day, the ride over was interesting as a number of the lanes we rode down were still under water from the recent floods. When we arrived we looked like we had just finished Paris Roubaix, rather than 26miles of English country lanes in summer. We were all covered in spray and mud but it was nice to get a few laps in, all be it on my standard road bike, complete with mudgaurds and lights! Hopefully I will soon get to borrow the st Johns track bike and have a go at some racing.

On a different note, one of the other things that I am interested in is motorcycle racing and this weekend there was a moto gp and motocross mx1 and 2. I wasn't that pleased with the moto gp result as I want Rossi to be beaten, and he won, but Stoner once again scored good points with a second. I've not got anything against valentino rossi, he is a fantastic rider and is arguably the best in the world, but I really want him to be beaten. My problem with Rossi is more with the commentaters. They seem to think he is the only person who can ride a moto gp bike, when in actual fact all of the top 20 riders are brilliant. Anyway, it would be nice to see the underdog do well so come on Stoner and the rest, get after him!

In the mx2 motocross the british had a winner with Tommy Searle, hopefully Searle will continue to progress and I may get to see an English world champion one day. That's about all for now, I seem to have rambled on a bit anyway.........
Posted by Davep at 00:45